AI and Robotics Will Disrupt Future Jobs, but How to Prepare is Still a Question

At the Einstein Alley “Future of Work” symposium on April 25, the speakers attempted to predict the future, though they admitted that they weren’t very good at it. What experts do know, they agreed, is that robotics and artificial intelligence (AI) will disrupt jobs – and very soon. 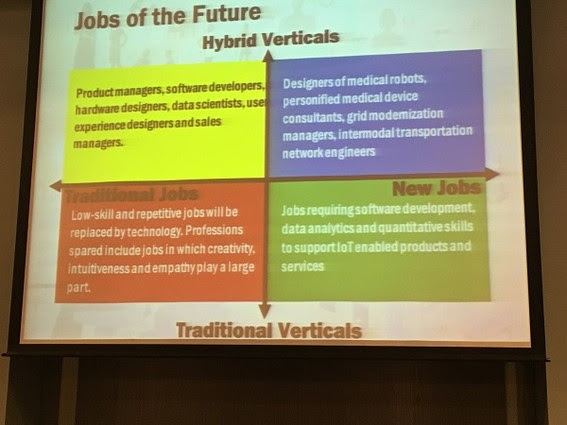 Katherine Kish, Einstein Alley executive director, introduced the event, saying that it would focus on asking the question, “How does innovation such as robotics and artificial intelligence, education, immigration and government policy all work together” to create the future of work.

Kish recommended a January 2017 McKinsey Global Institute Study that looked at how the jobs created by the world economy would be affected by AI, automation and cognitive machines. “The world will certainly be different, and perhaps a little scary, but very exciting,” she told the group.

Speaker James W. Hughes, dean of the Edward J. Bloustein School of Planning and Public Policy at Rutgers University, gave the audience a history of technology and described how technology has affected the nature of employment through the years.
Referring to the present, Hughes said that AI is just in its infancy, resembling the Internet in the mid-1990s. “If that’s the prototype, it will soon be built into everything. AI will be everywhere, just as the Internet is everywhere today.”