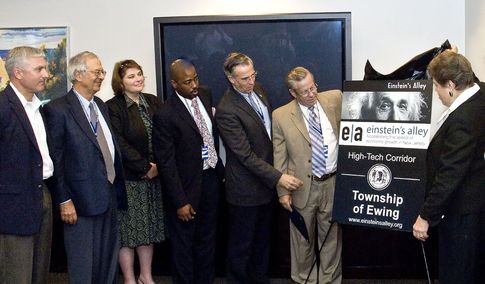 Even though Ewing has been a home for technology companies for decades, the township has never been hailed as a hub of high tech innovation.

Until now. A recently-placed sign at the entrance to the Trenton Mercer Airport heralds Ewing as now part of the Princeton region’s high tech corridor called Einstein’s Alley (EA).

EA, based in Plainsboro, is a private, nonprofit initiative focusing on fostering economic growth in the counties it serves by promoting existing companies and attracting new businesses into the area.

Ewing was officially welcomed to Einstein’s Alley last September at the Pfizer Air Hanger at the Trenton Mercer Airport.

Kish said that EA’s mission in Ewing is to contribute to a sustainable, high quality of life.

In a recent interview, Steinmann said that EA is getting the word out about the township by helping people learn about the variety of businesses that are in Ewing’s borders.

That has a positive impact on the township when people are thinking about setting up or relocating here, he said. Steinmann cited Church and Dwight, Computer Associates, FMC, Pfizer, and ETS as examples of existing businesses.

Kish, who heads a marketing and strategic planning company in Cranbury, became aware of Ewing’s potential as an Einstein’s Alley community about two years ago when she attended a town planning event and spoke with the mayor and municipal planner Chuck Latini.

The event explored possibilities for the Parkway Avenue redevelopment plan which includes the transformation of the old GM site into a transit village with potential connections to the Trenton Mercer Airport and the West Trenton train station.

Universal Display is a leading developer of the technology used in mobile devices, televisions, and lighting. Its Ewing headquarters on Phillips Boulevard employs close to 100 team members, including scientists, engineers, and business professionals.

Kish also mentioned Homasote, one of the oldest U.S. manufacturers of building products made from recycled materials. Located on Lower Ferry Road, the company makes products for home and commercial buildings including interior panels, tackboard, roofing and concrete foaming.

Other examples mentioned by Kish include Riegel Printing, Johnson & Johnson, and The College of New Jersey.

At least 15 years before EA was incorporated, Kish and other business owners had been thinking about the concept of identifying central New Jersey as a region known for its high tech industries and educational institutions.

Holt coined the term Einstein’s Alley in 2003 and shared the vision with members in business and academic communities. The concept gained momentum, and in late 2006, EA was incorporated.

Today, EA includes 10 board members and more than 34 supporters from the business and educational communities including the MIDJersey Chamber of Commerce.

Helping companies set up or relocate in New Jersey is one of EA’s most important projects. In 2009, Rive Technology from Boston Massachusetts opened a branch in South Brunswick, thanks to help from EA.

EA also collaborates with the nonprofit corporation Choose New Jersey to provide branding in its efforts to help bring new businesses into the region from other states and countries.

EA also works in partnership with the Delaware Crossing Investment Group in Pennsylvania and has developed a new angel investor group dedicated to helping entrepreneurs and businesses in New Jersey rather than other parts of the country like Silicon Valley.

Steinmann said he is optimistic about Ewing’s future. He said that being known as an Einstein’s Alley community positions Ewing as an attractive place for companies to locate, especially when combined with plans for the transit village and redevelopment.

“We see great potential for new companies moving into Ewing,” the mayor said.