Immigrant Entrepreneurs Honored for Making a Difference in New Jersey 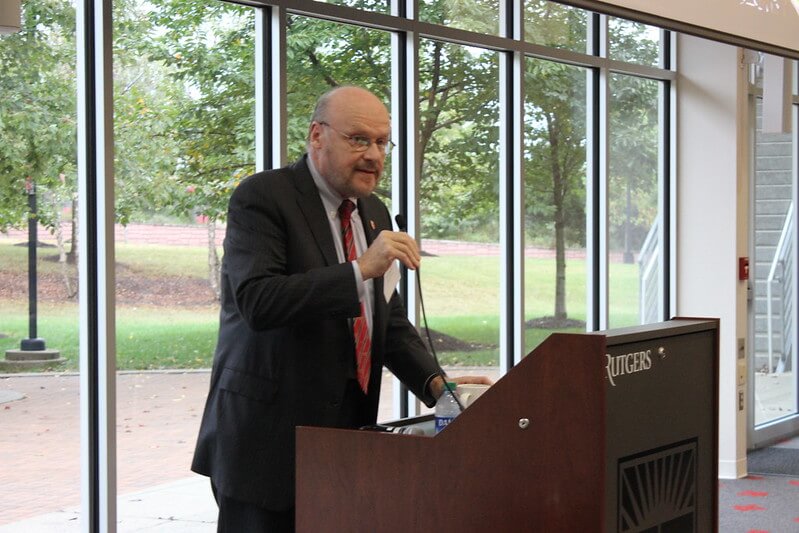 The winners of the 7th Annual New Jersey Immigrant Entrepreneurs awards were honored on Tuesday, October 8, 2019 at Rutgers University. The awards program featured Rutgers Chancellor Christopher Molloy as the keynote speaker and was hosted by the Middlesex County Regional Chamber of Commerce.

“We congratulate this year’s winners for their contributions to the State of New Jersey and recognize the importance of immigrants to NJ’s economy and society,” says Katherine Kish, Executive Director, Einstein’s Alley 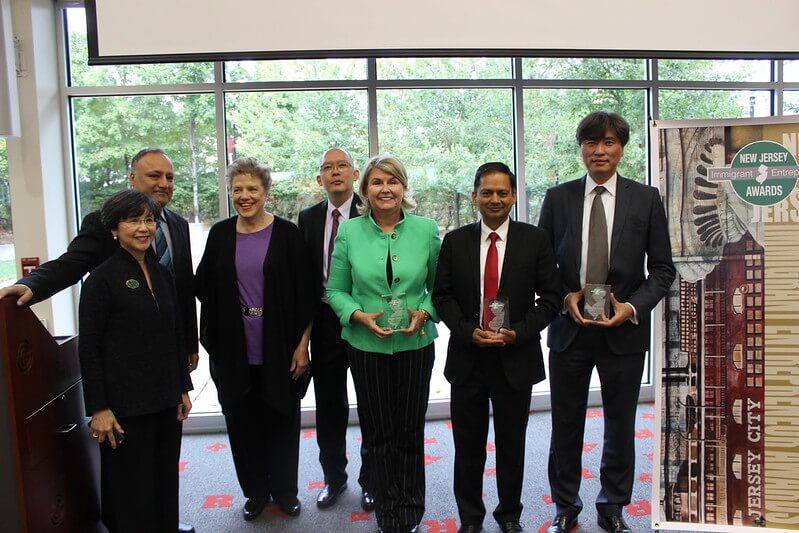 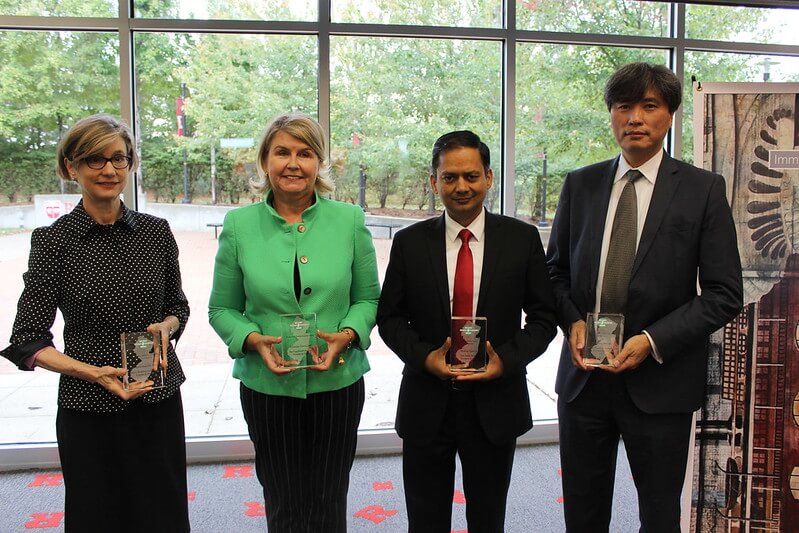 The 2019 winners, their NJ business location and country of origin are:

Anabelle Radcliffe-Trenner, Founder & Principal, Historic Building Architects LLC, Trenton, NJ will be honored with the Nicholas Marcalus Award for Sustainability. Annabelle Radcliffe-Trenner was born in London and educated in the United Kingdom. In 1983, she earned a Bachelor of Science in Architecture from Dundee University, Scotland and in 1986 a graduate professional degree in Preservation Architecture from the University of Edinburgh. She passed the UK’s Architects Registration Board Licensure Exam, completed a two-year professional work experience, and was issued a license to practice architecture in the UK in 1986. Radcliffe-Trenner came to the US when she married a citizen in 1988 and worked with local firms. In 1994 she obtained a Certificate in Architectural Conservation (Preservation) from the International Center for the Study of the Preservation and Restoration of Cultural Property, in Rome, Italy.

That year, having earned reciprocal architectural licensing in the U.S., Radcliffe-Trenner founded her own company, Historic Building Architects, LLC, a professional practice focused on restoring nationally significant historic landmark properties. HBA, based in Trenton, recently achieved its 25-year anniversary of successful operations. With a total staff of 8, HBA is certified as a Women-Owned Business Enterprise and a Small Business Enterprise by the State of New Jersey.

HBA has become a national leader in Historic Preservation Architecture, one of a handful of architectural practices in the US combining preservation architecture and material conservation services exclusively for historic properties such as religious buildings, museums, courthouses, and others in the public realm, listed on the National Register; many are National Historic Landmarks. HBA has won awards for over a dozen preservation projects.

Radcliffe-Trenner is a sought-after lecturer and writer on preserving the built cultural heritage, and a longtime Board Member of the Association for Preservation Technology International. She has been interviewed on National Public Radio and NJ Television on historic preservation issues, and about restoration by NBC and Fox Business News, following the fire at Notre Dame Cathedral,.

Sandeep Agarwal, President and CEO, Pure Indian Foods, Princeton Junction, NJ will be honored with the Caspar Wistar Award for Growth. Sandeep Agarwal worked for years as an IT specialist on Wall Street before founding Pure Indian Foods (PIF). His Indian heritage gave him an appreciation for the health benefits of Indian traditional foods like ghee, herbs and spices. He and Nalini started the business part-time after making a small batch of ghee and finding out that his family and friends loved it. It is now their full-time business.

The company has grown rapidly and has created 10 full time jobs in New Jersey, and is recognized as a leader in development and marketing of authentic, organic traditional Indian foods across the U.S. Sandeep’s interest in dairy history grew out of his family’s fifth-generation ghee business (started by his great-great-grandfather in 1889) and the culturally significant role that dairy plays within his Indian heritage.

Today Pure Indian Foods is one of the most respected Organic Ghee companies in North America. He brought the Ayurvedic Medicinal Ghee concept to a culinary level by introducing unique herb/spiced ghee products sold as food, which were recognized by The New York Times. PIF continues the family tradition of creating pure, wholesome Indian-heritage ingredients and foods for everyone to enjoy. PIF ghee is made from milk from grass-fed cows, so the products are natural and non-GMO and certified organic. PIF has expanded rapidly in the last few years as the business has innovated and expanded their product lines. The ghee product now comes in a variety of flavors and is the basis of new meal starter “Curry in a Hurry”.

PIF has been featured in numerous national publications, including the New York Times, Washington Post, and GQ magazine. Recently Sandeep and Nalini’s story was featured in NJBiz, highlighting their unique and growing New Jersey-based business.

Sandeep is a member of the board of directors for the NJ Food Processors Association and committed to enhancing public health through the promotion of access to natural foods.

Sandeep is a graduate of David Winston’s Center for Herbal Studies’ two-year herbalist training program and one-year graduate program. He has spoken at symposiums in USA and India. Sandeep initiated a website (www.butterworld.org) to educate people on the health benefits of dairy fats like ghee.

PIF contributes to the philanthropic organizations KickCancer, Real Food Recovery and the Weston Price Foundation, all devoted to promoting health through improved diet

Wei Wang, Ph.D., PE, President and Founder, UrbanTech Consulting Engineering, Mt Laurel, NJ will receive the Albert Einstein Award for Innovation. Through his successes with UrbanTech after working on the Marine Parkway and Third Avenue Bridges, Dr. Wang has continued to innovate and tackle engineering challenges. In 2011, alongside Kiewit Construction Company, a leading construction firm in the United States, UrbanTech played a major role in Amtrak’s Replacement of Two Bridges in Middletown, Pennsylvania. As principal-in-charge, Dr. Wang served as the structural engineer of record and was responsible for the design and construction procedures to facilitate the removal and replacement of two railroad bridges on the same route over one weekend. UrbanTech has since established itself as a leading force in Accelerated Bridge Construction (ABC)Dr. Wang led UrbanTech in the Replacement of the Kosciuszko Bridge in 2017. UrbanTech was responsible for the demolition schemes of the Kosciuszko Bridge approach and main spans. The approach truss spans of the Brooklyn Connector were replaced using Replace-in-Place construction methods. The main span was lowered onto a barge system with eight computer-controlled strand jacks working in tandem. The project was awarded Best Bridge Project by Engineering News-Record.

In the last 3 consecutive years, UrbanTech was selected by the Initiative for a Competitive Inner City (ICIC) and FORTUNE as one of the 100 fastest-growing inner city companies. UrbanTech has annually increased its rank since its first award in 2016. The Inner City 100 program selects businesses in underprivileged urban areas that offer “access to national visibility, executive education, and networking opportunities”. ICIC considers a company’s annual revenues and high-growth rates from the last five years.

UrbanTech and Dr. Wang’s successes would not have been achieved without the support of the engineers and staff forming the growing and innovative company. With two growing offices in New York City and South Jersey, 86% of UrbanTech’s employees are first and second generation minority immigrants.

Dr. Wang acknowledges the challenges of citizenship in the United States and sponsors employees seeking work visas and the opportunity to receive a green card. UrbanTech’s vast cultural background invites different ideas to the table–allowing for innovation to address current engineering challenges.

After graduating from university, Veronique was a General Manager in Scandinavia, UK, Latin America, and Eastern Europe for a pharmaceutical company called UCB Pharma. She earned “Young Businesswoman of the Year” from the Financial Times in 1994. She then took a job in Atlanta, GA as the Head of Marketing, for UCB Pharma, working with Pfizer to launch a UCB – invented product for allergies called Zyrtec®. She stayed in the U.S. after her 3-year expatriation contract, got a green card, and ended up at Johnson & Johnson and then Pfizer, in leadership roles of growing importance. After a wonderful career, mostly in marketing and sales, she went back to school, got a master’s in nutrition in 2006 and become a full-time entrepreneur.

Veronique’s weight loss program, The CogniDiet, is based on the principles that your brain is plastic and can develop new behavioral and thought pathways. Applied to weight loss, it allows you to start to adopt new healthier behaviors and lose weight for the long-term.

The Immigrant Entrepreneur Awards are named for great, historic New Jersey immigrant entrepreneurs. The many nominees represent small mom and pop businesses as well as large corporations; ranging from high-tech firms to professional service providers, from manufacturing operations to restaurant and financial institutions. Combined, they employ hundreds of people and do billions in sales.

By Website Webmaster|2019-11-22T17:46:03-05:00October 9th, 2019|Categories: Entrepreneurship, Uncategorized|Comments Off on Immigrant Entrepreneurs Honored for Making a Difference in New Jersey