Middlesex, NJ — Despite making up 34.5 percent of Middlesex County’s population, immigrants accounted for 64.4 percent of the county’s Science, Technology, Engineering, and Math (STEM) workers and 49 percent of business owners in 2018, according to new research from New American Economy (NAE). 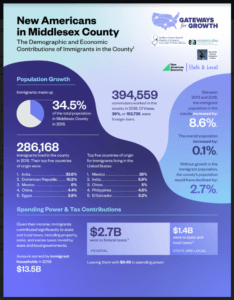 The report, which was published in partnership with the Middlesex County Regional Chamber of Commerce and Einstein’s Alley, highlights the economic impact that immigrants in Middlesex County have on their community, such as contributing $2.7 billion to federal taxes and $1.4 billion to state and local taxes in 2018. Immigrants also supported critical social programs, including paying $1.3 billion into Social Security and $353.2 million to Medicare. Immigrants held $9.4 billion in spending power, 42.8 percent of all spending power in the county, providing an economic boost to Middlesex County as consumers.

The report also highlights how immigrants fill crucial workforce gaps in industries vital to the economic stability of the county. While representing 34.5 percent of the total population (the national average is 13 percent), immigrants represented an outsize share of workers in industries such as professional services  (54 percent), wholesale trade (51.9 percent), transportation (50.5 percent) and manufacturing (49.8 percent). Immigrants also helped strengthen the local job market by helping to preserve or create 13,164 manufacturing jobs that would have either disappeared or moved elsewhere by 2018.

The new report was discussed at the Middlesex County Regional Chamber of Commerce’s Economic Outlook 2020 event at Rutgers Visitors Center on Thursday, January 30th. The launch of this new report coincides with the recent formation of the New Jersey Business Immigration Coalition spearheaded by Einstein’s Alley, which brings together New Jersey business, higher education, and economic development leaders who are dedicated to promoting sensible immigration reform that supports economic growth.

“As we prepare for the next Census, we have already seen a sizable shift in the demographics of Middlesex County, greatly changing our economy,” said Lina Llona, President of Middlesex County Regional Chamber of Commerce. “The county continues to evolve and grow in a very exciting way, as many new businesses are competing on a global scale in all areas of STEM. We warmly welcome new opportunities from our immigrant community, which is identifying new ways for Middlesex County to remain at the forefront of commerce on both a domestic and international scale. We are excited about the findings of this report, as we prepare for a vibrant future with many new local partners.”

About the Middlesex County Regional Chamber of Commerce

The Middlesex County Regional Chamber has attracted the attention of top government and business leaders in the state as one of the premier business support groups in New Jersey. For over a hundred years, the Chamber has helped drive economic growth in and around the region, while continually providing an inclusive business community.  More information about he Middlesex County Regional Chamber can be found at https://www.mcrcc.org/

Einstein’s Alley is a private, non-profit economic development initiative located in Central New Jersey. Its mission is to foster economic growth through advocacy and delivery of services that help build an entrepreneurship ecosystem, promote livable communities and sustainable development, support the workforce of the future, and more. Additional information about Einstein’s Alley can be found at https://einsteinsalley.org/

New American Economy (NAE) is a bipartisan research and advocacy organization founded to educate, empower and support policymakers, influencers, and citizens across the country that see the economic and social benefits of a smart approach to immigration reform. NAE has created a coalition of civic, business, and cultural leaders who span the political spectrum and represent all 50 states. NAE makes the case for smart immigration reform in four ways: 1) we use powerful research to demonstrate how immigration impacts our economy, 2) we organize champions at the grassroots and influencer levels to build support for immigration, 3) we partner with state and local leaders to advocate for policies that recognize the value immigrants add locally, and 4) we show immigrant contributions to American culture through film, food, art, sports, comedy, and more.