The Future of Work – Part 2

The Future of Work – Part 2

Looking through the Lens of
Technology, Economics and Society 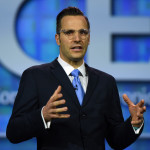 Chief economist/senior director of research and frequent speaker from the Consumer Electronics Association. Author of Digital Destiny: How the New Age of Data Will Transform the Way We Work, Live, and Communicate

(Regenery, 2015) which explores how the world’s mass adoption of digital technologies portends the beginning of a new era for humanity in the realms of economics, health, travel, and culture. chief economist/senior director of research.

As business, technology and policy leaders, we must explore these trends and try to predict how they will affect employees and employers, individual careers and organizations.

By mid-century, 2042, the population of the United States will be majority non-white and our median age will edge above 40-both unprecedented milestones.What will it mean for the Future of Work?

America is in the throes of a demographic overhaul. Huge generation gaps have opened up in our political and social values, our economic well-being, our family structure, our racial and ethnic identity, our gender norms, our religious affiliation, and our technology use.

Looking through Tech Lens, Experts Give Glimpse of Future of Work at Einstein’s Alley Event

During a discussion about the future of the job market, on Nov. 12 at Rutgers University, two experts gave audience members insights into America’s coming economic and demographic changes.

The event was organized by a private, nonprofit economic-development group, Einstein’s Alley, and held at the university’s Heldrich Center for Workforce Development, in New Brunswick.

Planned as the first in a series, the discussion was titled, “The Future of Work – Part 1: How does Innovation Affect Work in the Future? Looking through the Lens of Technology, Economics and Society.”

The featured speakers, who also welcomed audience questions, were Paul Taylor, a senior fellow at the Pew Research Center and a former newspaper reporter, and Carl Van Horn, the founding director of the Heldrich Center.

Katherine Kish, executive director of Einstein’s Alley, opened the discussion by outlining some of the economic changes already taking place.

She told the audience that, for the first time in US history, “we now have four generations in the work force,” and she added that each of these generations is “presenting interesting concerns and opportunities.”

Nevertheless, such concerns and opportunities are usually not at the forefront of people’s minds, said Taylor. This is partly due to the fact that, given the slow pace of economic and demographic changes, they are rarely considered newsworthy.

“I had an old editor at the Philadelphia Inquirer who described these stories as stories that ‘ooze rather than break,'” he said. “Nobody calls a press conference to announce” such changes, Taylor added, but they will have a large impact on the American workforce.

Technology is one of the major factors driving change in the job market. Although hesitant to make firm predictions, Taylor noted that technology primarily seemed to be replacing the mid-range white- and blue-collar jobs that are most easily performed by machines.

Conversely, certain “lower-end service jobs” will apparently continue to be occupied by humans, Taylor said. He added that there were also some high-level jobs for which humans would hopefully remain uniquely qualified.

But the jobs that remain will not provide enough employment opportunities to meet demand, according to Van Horn. As an example, he referred to the retail sector, where jobs are already being replaced by automation.

While the most obvious case may be Amazon’s putting brick-and-mortar bookstores out of business, “this is also going on in Lowe’s, and Home Depot, and Walmart,” Van Horn said.

Van Horn also pointed out the use of automation in restaurants like Olive Garden, which, he said, simply reheated food that had been made in a factory. “There are no chefs there anymore,” he added, “there are just people who manage the buttons.”